There are about 347 million active Snapchat users in 2022. In comparison to many other apps, this number is low, but Snapchat is still a popular app.

Kids often start developing an interest in Snapchat in middle school or high school. Has your child downloaded the app yet? You might be wondering “How old do you have to be to have Snapchat anyway?” and “How can I keep my child safe?”

We’re here to help. Read on to learn what you need to know to protect your child on this popular messaging social media app.

First: How Old Do You Have to Be to Have Snapchat?

As with most social media apps and sites, all users must be thirteen years old to join. This doesn’t mean that younger people don’t try to use Snapchat, however.

People of all ages use Snapchat, but the largest age demographic is 18-24 years of age. The vast majority of the site’s users are adults, and that’s important to keep in mind as your child navigates the app.

For people under the age of eighteen, there are no publically browsable profiles. Of course, this relies on your child being honest about their age. This is an extra safety measure that Snapchat implements.

Snapchat is an image-sharing and messaging app that first hit the market in 2011. With Snapchat, users can share “stories” and send each other pictures (“Snaps”) and those stories and pictures will disappear after they’re viewed.

You can also use Snapchat to set up group chats in which you can send text, photos, and videos.

While you can save messages, photos, and videos, as well as take screenshots, the app will notify other users if you do so.

Snapchat now also has other features. People can see their friends’ locations, watch videos, and play little games. There are also fun filters they can use to modify their appearance.

There is now also a “Spotlight” feature on the app that features short videos. It’s meant to mimic another popular app, TikTok, but it’s not nearly as popular.

Most people who use Snapchat are exclusively using it for messaging features and occasionally just the filters to create and save fun photos.

Why Is It Popular Amongst Young People?

Snapchat is not as popular as it once was, but young people do still enjoy it. Why is that?

Snapchat is different from most social media apps. Instead of photos and videos staying there forever, people can post temporary snippets of their lives and have them disappear by the end of the day. Some young people enjoy this variety (though Instagram also has these features now).

Snapchat allows friends to stay in touch without any pressure. It’s also a good way for teens who have limited phone plans to use the internet to talk instead.

Younger teens may be under the impression that Snapchat is completely safe and private. It’s important for them to learn that other people can save their photos and videos, so if they’re sending anything they don’t want the world to see, it could still get out.

What Parents Should Know About Snapchat

So as a parent, what’s important for you to know about Snapchat?

Again, most Snapchat users are adults. While your child will likely never intentionally interact with those adults, it’s a good idea to keep a close eye on your child’s Snapchat usage to make sure they’re not talking to grown-up strangers.

While Snapchat seems safe and private, there are people who will save photos, videos, and chats. If your child posts anything inappropriate or illegal, it can become public without them knowing.

As with all apps and websites, there are predators on Snapchat. The vast majority of Snapchat users are “normal” people, but you can never be too careful when it comes to the potential of online grooming and abuse.

So how can you keep your child safe on Snapchat? Here are a few quick Snapchat safety tips for parents.

Even if your child has hit the right age limit for Snapchat, there’s nothing wrong with not allowing them to use it for the time being. Some children aren’t mature enough for social media yet, and that’s okay.

You know your child best. Even if they’re thirteen, it’s still appropriate to use the parental control features from Family Orbit to stop them from using the app until they’re mature enough.

At the very least, don’t let them use the app until you’ve talked to them about online safety.

Limit Use of the App

Even if you choose not to block Snapchat, it’s still a good idea to limit its use. You can set time limits on your child’s phone to limit certain apps. This will help them stay focused during the day and learn how to prioritize their phone time.

Snapchat isn’t as addictive as other social media sites, but children can still end up spending too much time on it.

Tell Your Child About Bots, Scammers, and Other Threats

Communication is often the best tool you have as a parent to protect your child. Be open and honest with your child about some of the threats present on Snapchat.

Bots and scammers are rampant on Snapchat. While your child’s profile shouldn’t show up when bots and scammers search for it (provided they’ve given their correct age), it’s important for your child to understand how to identify these accounts.

These accounts generally have randomly-generated usernames. They’ll often send an inappropriate first message without being added as a friend. When someone clicks on a link in the message, they’ll go to a site where the scammer will try to take money from them.

Your child also needs to know how to handle online strangers that are real people instead of bots. Talk to your child about blocking unfamiliar accounts for their own safety.

It’s a good idea to have a conversation about online privacy as soon as they start using the internet, but those conversations should continue every time your child starts using a new social media app.

Talk about the information your child should never share, like their full name, their address, and their phone number. They should also avoid sharing any details about their location (such as the name of their school).

It’s a good idea to take a look at your child’s friend list every so often if they’re consistently using Snapchat. With child-friendly settings, children will only be able to message their friends. That means everyone you see on the friend list should be someone your child knows at least a little bit.

Go through the friend list and ask your child how they know each person. Consider a monitoring app if your child is secretive about his or her online friend list.

Snapchat has several helpful privacy settings that can protect your child. Set up those settings on your child’s app.

You can set who is able to contact your child, see their location (this is an important one), and send them notifications. Turn on “ghost mode” so no one is able to see your child’s location.

You can also turn off the “quick add” feature so your child has to manually add people.

Keep an Open Line of Communication With Your Child

At the end of the day, the best thing you can to do protect your child on Snapchat is to keep an open line of communication with them. Mae sure your child feels safe coming to you with problems or concerns.

It’s healthy to restrict a younger child’s internet usage, but as you start to loosen those restrictions, you should still keep an open dialogue. This doesn’t mean you don’t trust your child. It means you want to keep them safe.

Show your child respect by giving them some freedom, but let them know that you’re adding restrictions to keep them safe, not to limit them.

Keep Your Child Safe on Snapchat

So how old do you have to be to have Snapchat? Age restrictions on the app say you need to be at least thirteen years old, but that’s not old enough to navigate the app without a parent monitoring it.

You need to protect your child from online threats on Snapchat.

We want to help. With Family Orbit, you can use a variety of parental monitoring and control features to limit your child’s app usage and keep them safe while they navigate the web. You can get a 7-day free trial to try it out for yourself!

We want to keep your family safe. 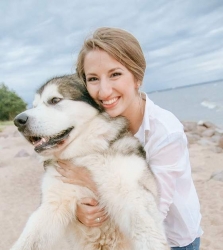 Lauren May
Lauren May is a freelance writer and frequent traveler. When she’s not creating content for clients, she enjoys blogging about freelancing and frugal living on her site, The Write Budget.

Latest posts by Lauren May (see all)